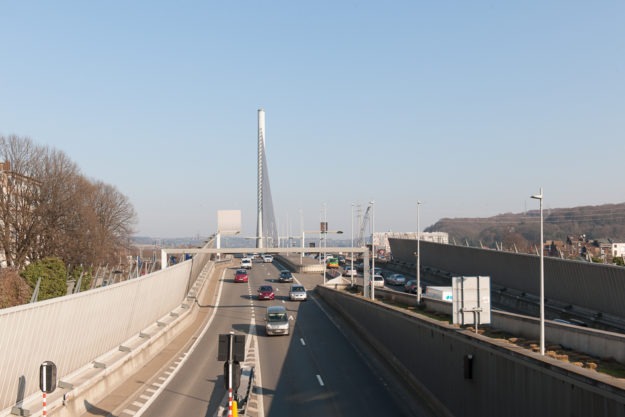 From 4 July to 23 August 2022 incl., part of the route will be closed to traffic. This closure will apply in both directions, between junction n°38 “Angleur/Grosses Battes/Belle-Ile” and junction n°37 “Val Benoit/Seraing/Marche.

ACTIONS TO RELIEVE THE ROADS OF THE FIERY CITY :

Liège, located in the heart of the Euregio, attracts a lot of through traffic. That is why a series of measures is being taken to ensure that the Liège inhabitants, day trippers (or those who are staying longer) and customers can get through more easily. The measures relate to the transit of private vehicles, but also to vehicles weighing more than 7.5 tonnes and long vehicles (including caravans and coaches).

1) The transit traffic will have to avoid the province of Liège and will have to follow the alternative routes designed for that purpose:

2) Heavy trucks over 7.5 tonnes and vehicles over 6 metres long (including caravans and coaches) in transit will be banned in the Liège conurbation.

Specifically, these transit vehicles will be banned from the following roads during this period

3) More than one mobility solution :

The parking lots at the railway stations of Angleur, Ans and Esneux can be used as free P+R car parks. Users can thus leave their car there and take the train to go to the city and back to the P+R.

All too often overlooked, the train is more than ever an ideal transport solution for travelling within the Liège conurbation, but also within the city. The Liège-Carré (4 minutes from Liège-Guillemins station) and Liège-Saint-Lambert (7 minutes from Liège-Guillemins station) stations are ideally located for trips into the city for Liège residents, students and day-trippers.

Here are some figures on travel times by train from different stations to Liège-Guillemins: from Chaudfontaine 10 min, from Herstal 15 min, from Visé 18 min, from Liège-Saint-Lambert 7 min, from Liège-Carré 4 min…. In addition to the various parking lots, there is a free P+R near Angleur station.

Travellers are invited to plan their journey via the SNCB app or the website www.sncb.be

The bus : in the heart of the neighbourhoods as well as the presence of a P+R !

To reach the heart of each neighbourhood, the bus provides a mobility solution. Shuttles are also offered from the Vottem P+R car park, located at the end of the A313.

And for longer journeys, the City Pass is an interesting alternative (train + bus = City Pass). The train and the bus are in fact two complementary means of transport available for 6€/day and … just to be used to one’s heart’s content !

The bicycle : efficient, fast and healthy

Liège has more than 100 km of cycling infrastructure, more than 3,000 parking spaces for bikes. Bike hire is available at the Point Vélo in Guillemins station !

Car drivers can find the closest paying car park to their destination at www.cestlemomentdechangerdemode.be. Thanks to the “Liège en poche” application, finding the most suitable parking space based on your position is a piece of cake!

Dynamic signposting in the city area also directs you to free parking spaces. They indicate the number of available spaces. This makes it easier to find a parking space, so that traffic is less congested, traffic flows more smoothly and there is less impact on the environment. Waze will be your best friend!

Answers to your questions here:

Analytical cookies are used to understand how visitors interact with the website. These cookies help provide information on metrics the number of visitors, bounce rate, traffic source, etc.

Performance cookies are used to understand and analyze key website performance indices, which helps to provide a better user experience for visitors.

Advertisement cookies are used to provide visitors with relevant ads and marketing campaigns. These cookies track visitors across websites and collect information to provide customized ads.